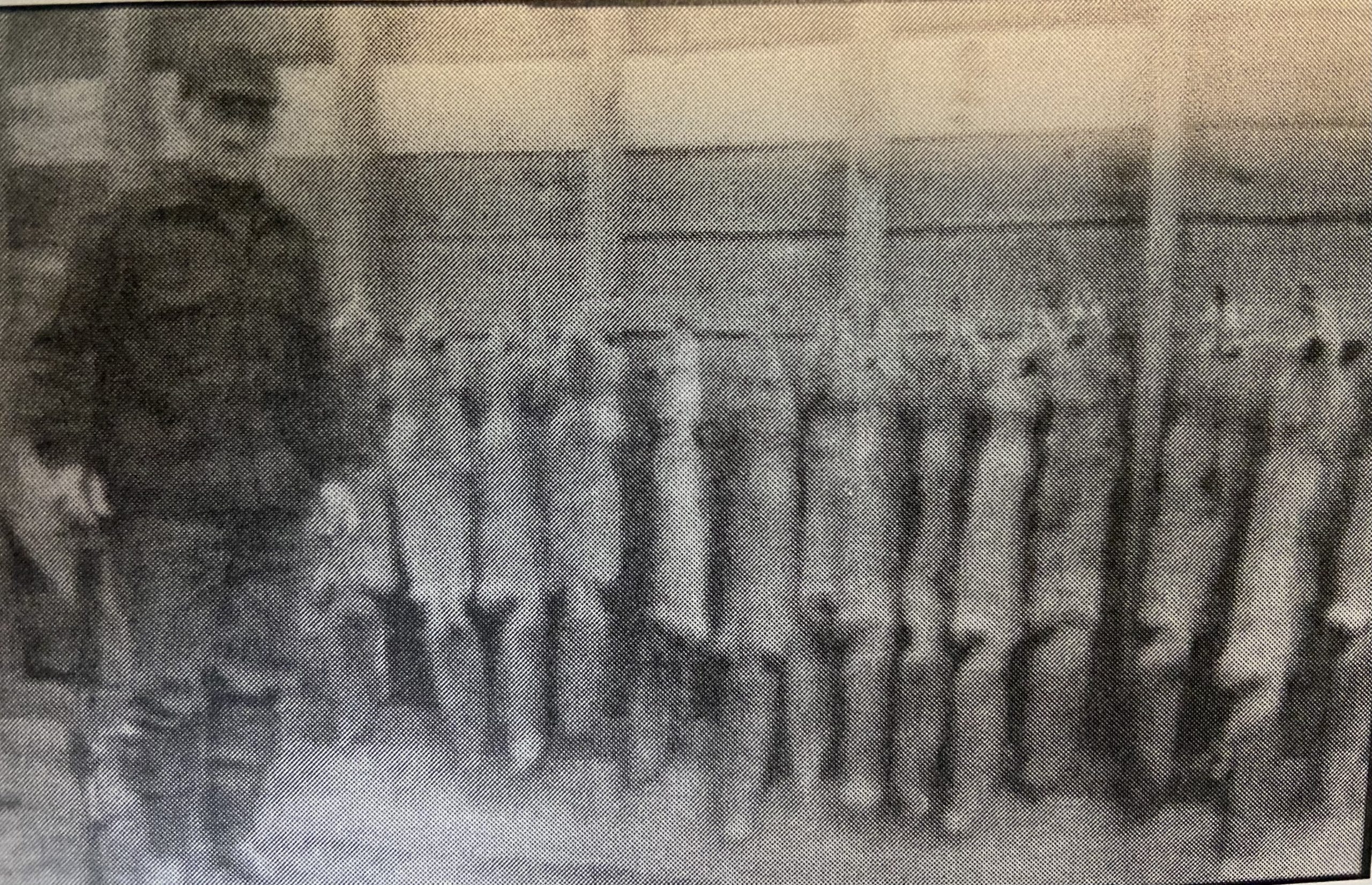 And its Speckled Beauties

God bless my soul, you are growing old.

So I took my pole, line and hook and started

Out back for the “Sherman Brook”

Each stop took me forward, not knowing my fate.

Out thro’ the “Rye Lot”, I plodded with glee.

Down round the curve by the “Old Beech Tree”

Through the “Carter Lot Gate”, I traveled along.

The brook was below me, singing its song.

I baited my hook and got ready my pole.

For out in the stream was my favorite hole.

I cast in my line, and pulled him out,

And there on the bank lay a “Beautiful Trout”,

I gazed at the beauty with color sublime.

In answer to my “Final Dream”

Before we talk about my plagiarism in this case, I believe that at this point the man that wrote this would give me his blessing in using it. He would likely enjoy giving the world a peek into his little slice of heaven and his flare for telling a story. You see, I’m not the only person in my family who would write about their passion for the natural world and our interaction with it. The man who wrote this was my Great Grandfather, Frank. The poem takes place on the farm he and my Great Grandmother Evelyn purchased. They then increased its holdings, production and number of occupants, with their growing family.

At the time I started exploring the surrounding lands it was owned by Don and Joan Williams, my Great Aunt and Uncle. These adventures started in earnest with my Uncle Stephen. Later my dad, Scott, would teach me how to really hunt there, on Sundays I didn’t have wrestling. After highschool I would drive the half an hour or so to get up to Panther Lake, almost weekly.  Uncle Don even  knew when I had gotten new tires on my S10 by the time the end of summer rolled around from the change in tread pattern in the sand.

When I was little my Uncle Stephen would take me in those woods and we would put up or build some tree stands, do some fishing, catch some frogs and get me “lost”. By the time I was old enough to hunt there I had been “lost” enough that my compass became mostly useless.  I knew where I was all the time. Not long after that my dad shot a seven point buck when I was with him, the first deer I had ever seen taken while hunting.

My Uncle told me to sit on the front hill one evening, normally the deer would be coming through the woods behind the knob. That watch was at the edge of a pine patch and hardwoods. That evening a nice six point  did exactly that. He was my first buck, I killed him with a borrowed 30-06 and a well placed shot. Many memorable mistakes were made before that, but those are stories for over a beer not in a blog.

A fall or two after that I read “How to Bag The Biggest Buck of Your Life” by Larry Benoit. I decided I was going to become a tracker. At breakfast one particular morning, in the arrogance of a very young man, I told my Father and Uncle that I was going to do so. They chuckled and encouraged me. Well, at the end of a track that day was a three  point buck that I shot at 10 yards. Not my biggest buck but maybe my favorite of all time. This was the only buck I have ever tracked in my life. Oh to be that self confident again.

I realized I could catch more of those Speckled Beauties if I would float my bait under a small cork bobber on the Sherman Brook. The more natural color and presentation would not hold a Beautiful Trout back from hitting the worm or fly slinking past their nose. I have more outdoor memories on this property than just about any other place I’ve ever spent time outside.

My Uncle and I are very close, and I believe this piece of land, this 400 or so acres helped make it that way. We had been inseparable in a lot of ways for all of my life. My son’s middle name is Stephen after my Uncle. This is the place he watched me grow into a man, and where he first really started to treat me like one. Our cumulative memories there were innumerable.

I had moved away from Upstate New York. I went to North Carolina, attended college, worked full time to put myself through school and learned some hard life lessons. After a few years and a few miles I finally made my way back. Uncle Stephen called me. The news carried some weight.

“Uncle Don is selling the property, closing soon”, he said.

I can’t write the rest of that conversation in any sort of quotes, but I remember an immense feeling of loss. I can only speak for myself, but the idea of not being able to wander around this place carried the weight of losing a family member, or friend. And just as you would for a friend or family member we decided right there, we would have a vigil or remembrance. We would do it in the only fitting way we could. We would sneak on one last time and go for a hunt. But this hunt would be completely different. It would be a duck hunt.

At the “Back” of the acreage was a beaver swamp, or as we call it The Beaver Flow. We often deer hunted back there, we’d hike back to it, hell, I had even tried to fish it before but never duck hunted it. When I was younger we didn’t hunt waterfowl. During the time I was gone, continuing the journey of becoming a man that I had started on this land, we had both started to enjoy the sport of duck hunting.

During all the mornings we had sat over the beaver flow we had seen ducks fly over, around, and drop down into this bowl of standing timber, grass and water. Knowing what I do now, that place would be a go to honey hole, it just wasn’t on our radar for that before. So there, in the dark, with waders on, decoys, guns and headlamps we walked up and down the ridgelines for what seemed like way longer than it ever took in wool pants. We finally slid down the hill and spilled into the flow.

We set the decoys up in a likely opening, chatting about all the things we enjoyed about the property, and how we couldn’t believe this was the last go round we’d have there. We shared stories of things we’d seen and done there, both together and separately, before and after I was born. The generations before me had either grown up on the farm or spent a lot of time there with their grandparents. We finished setting the decoys and tucked into some deadfall on the bank.

As we watched the sun come over that place for the last time we spoke very little which is a rarity for me, my mouth tends to babble babble. And just then with a perfect fall morning crackling around us, in came….nothing. There were no ducks. Just as it seems to go, when you’re deer hunting all you see is squirrels and when you decide to hunt small game you see deer. So went the picturesque idea we both dreamed of the night before. We weren’t there for the ducks though. We just sat and took it all in.

It was as if we were at a viewing or a funeral, that moment that you’re waiting for,when you think the loved one will talk back to you. Then it dawns on you that they cannot and won’t ever again. The parts of them you keep with you are the parts that stay alive. We had taken enough great things from that place and it owed us no more. But with that just like the special little things you tend to see around you after the loss of a loved one, we got to see one flock of Wood Ducks pass by us at about 100 yards. One last “Well, Hello There.” and an idea that maybe Frank and Evelyn wanted to let us know they saw how much we cared.

When the closing happens to me, in the reverse fashion, and I buy the farm, I hope my loved ones think about me with their  first impactful moment in nature after my moving on. That is one of my greatest wishes.  And I hope one of them has enough reprobate left in them, with a bit of rue for authority, to sneak just a handful of my ashes onto that front hill or maybe even toss some  into the Sherman Brook.