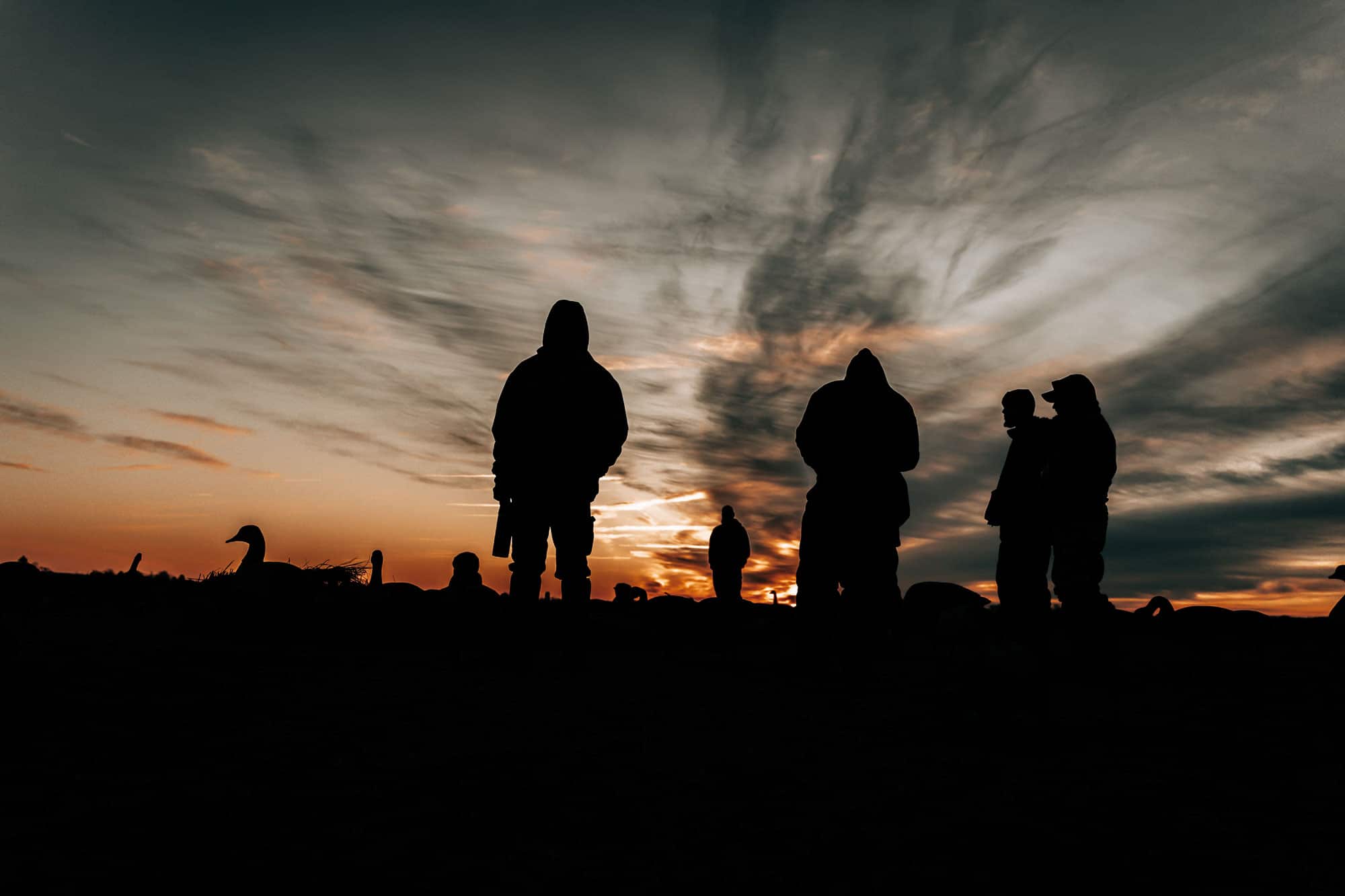 Aside from my father I would say I have had two real hunting partners in my life. One is family and the other mine as well be. I have two really great fishing buddies as well. Furthermore, I have a cousin who is also very busy with all things in life. We don’t hunt together often but we also talk and text about it constantly.  If the opportunity presented itself I believe that they would be good hunting partners too. What has set them apart from the dozens of other people I have spent hours with out in the woods and on the water? Well, other than their ability to put up with my bullshit that is? Let’s dive in and try to figure out what makes us tied at the hip for outdoor adventures.

I asked them all the same questions via text message and prompted them to be brutally honest about their answers. I wanted to see if we could drill down on some common themes to bring out what has made us good partners in our adventures. What makes me compliment them in the pursuit of the natural world.

The question is based on this “Why are we good hunting partners?”

The Good: The question was “What is the best part of having me as a hunting/fishing partner.” If I were to look at the cumulative answers it comes down to shared values. I think this is probably the most important statement in a good partnership. I don’t necessarily mean religion, political or fiscal values either, although those may help.

Family values fall into this category, if you prioritize family, like I do, your hunting partners need to understand that. I don’t care what’s happening, I will not miss Halloween or my son’s  Birthday. Both of which fall during hunting seasons. My buddies need to understand and be okay with this. We may have to drive separately or hunt/fish alone one or two days during those stretches, but those are boundaries I put in place and with that they can do the same. Brad is my cousin, I hunt with him the most. He has a wife and a step son. We have cut trips short or rearranged weekends for baseball and ultra marathons. Craig and I have been friends for 20 years. I was in his wedding and I am his daughter’s godfather. We both understand the priorities of parenthood and take the fact that we ran around the woods and water at will together for 10 plus years into account. Now we do it when our schedules line up.

Work ethic is another aspect in the spectrum of values that was noted. Jim, who I have spent more time on a boat with than probably everyone else combined, stated that the competitive nature of our fishing was a draw and bonding opportunity. We fish in very different styles so we were always grinding to catch more or bigger fish, there was always one more cast. Tom, is another cousin. We don’t get to hunt together a lot, he is a family man with a wife and three kids and a MLB player. We talk about hunting on almost a daily basis. He pointed out that we have the same level of work and effort. Brad said we are willing to do anything and go anywhere to get the job done, without complaints. Your hunting partner needs to love the process as much as you do. Your levels of input and output need to be nearly equal.

Craig also brought up valuing conservation of the resources including responsible harvest of fish. Brad focused on the fact that I enjoy the entire process of hunting, scouting, setting stands, building blinds, cameras, content and that we share the year round mentality. Your values don’t have to be the exact same as your hunting partners, and if you have multiple hunting and fishing buddies they don’t have to have the same values either, but yours need to complement each of them. Jim doesn’t keep a whole lot of fish, Craig does, I keep this in mind with each of them. TJ will get up at 2 am if that’s what is needed to catch the first flock of the morning, Brad on the other hand will hunt his way in during gray light to best take advantage of his level of patience and will change tactics at the drop of a hat. TJ and I stick to a plan, with Brad I am very fluid with planning. You’re there as much for them as they are for you. And that’s for the bad too.

The Bad: “ What’s the worst aspect of hunting/fishing with me?” I asked each of these men to be brutally honest with me. That’s a lot to do with someone you need to trust with flying hooks, bad weather, treestand, fast and deep water and firearms. There have been moments with each of them that I was ready to leave them out there and I know for sure they have more times than that when they were ready to tell me to pound sand and we are done doing this together. Here are the examples that came to light that I may not have seen coming.

Competition, Jim and I are competitive with fishing and we have viewed it as a good thing most times. Yet, deep down in my dear friend’s soul lived a beast that wanted to toss my over competitive ass into a deep hole with an anchor tied to my leg because of that same competition. At least that’s the way I read his text answer. He mentioned something I do all the time that I had no idea bothered him. I slap my lures off the top of the water to clear weeds. I do it maybe dozens of times on a given fishing trip. He hates it. I understand why that’s annoying and I totally won’t ever do it again when we are together, unless he is out fishing me.

One of the things Brad mentioned was along the same lines, the good was we feed off of each other. The bad aspect was the same, we feed off each other. So, instead of one helping the other push through the tough days or mornings of laziness we join in commiserating or skipping time in the stand we should be partaking in. So, we have always known that but now that it has been verbalized I will do my best to push when it is on me to do, but I will ask him to do the same. It’s a partnership after all.

TJ pointed out the fact there were plenty of early days that we didn’t like each other until the decoys were set and we were watching for incoming birds. We both learned you didn’t have to want to like someone to work as a team. This occurred with some of those very early, very cold and very quiet long line sets. We hunted enough together we didn’t really need to speak to lay out twelve dozen decoys on long lines in the pitch black. We were well oiled even if we were giving each other the silent treatment.

The Ugly: With TJ, Jim, Craig, and Tom they all gave an answer that I take as the biggest compliment. It’s the ugly truth of growing older. The worst part is we don’t get to do this stuff together enough. That was their “worst part” and I agree. I spend weeks a year hunting, scouting and camping with Brad but trying to line that up with the others is almost impossible. So at the end of the day, we do our best and know we always have the outdoors.

Friendship, this is the highest priority. For my family and friends that I hunt and fish with, we value that bond more than anything else. We level at the same place, fish, bucks and ducks are great, but time spent together is the driving factor in all of this. Whether its skipping morning sits to grab coffee and drive around glassing fields, grabbing Bojangles after a duck-less morning, beers and rigging rods only to get skunked on the first salmon trip of the fall, sharing baby pictures and trading one liners from the Simpsons or texts of trail camera videos, pictures and talking about heavy metal therein lies the point. I value them, and I think I can say with confidence they value me enough that success is a great goal but it truly is the journey that matters. And when success happens I am happy to have such great men in my life to share that great feeling with. I know they have my back and I have theirs. I believe this is the essence of the pursuit of game, a story as old as time. These bonds are forged in the first embers of the human spirit and continue to burn no matter how much time they are left to the side of life. A  cupped bird, a chasing buck, a spawning salmon, dropping acorns or hard hitting smallmouth is all the spark we need to continue to burn that fire. A hunting party is as ingrained as procreation or communication. It’s what makes us human, and if you find the right hunting and fishing partners, they can help make you a better human.

Previous Post: « Guided Hunts and Being a Good Client
Next Post: Kitchen Craft: What Do You Need for the Best Wild Game Recipes? »