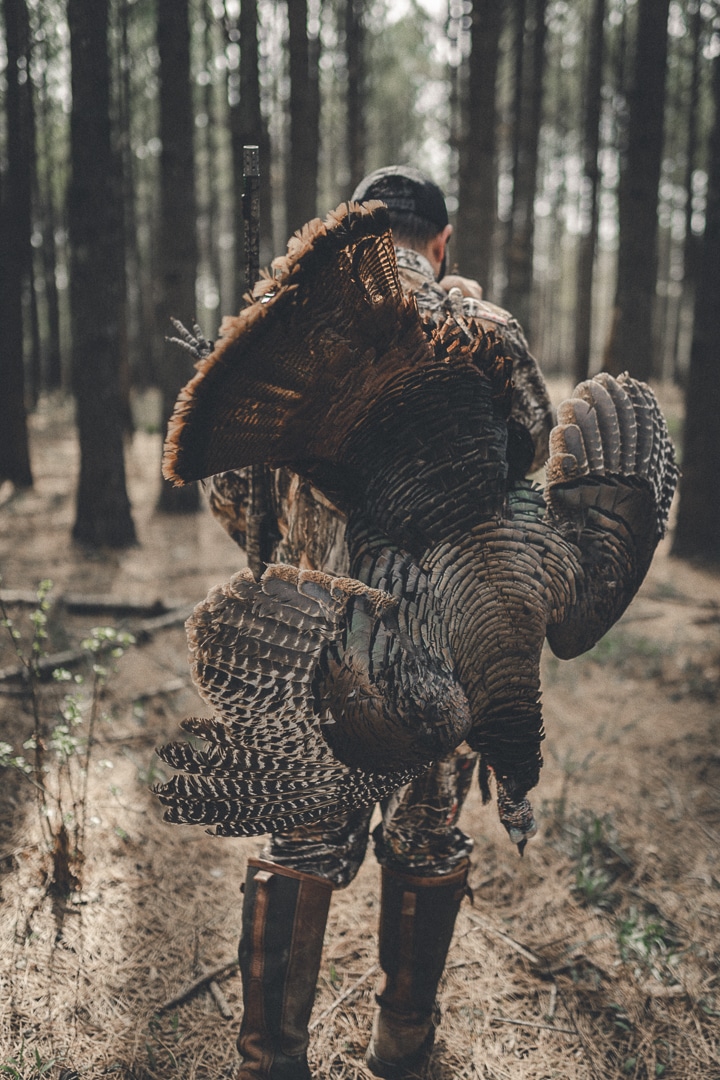 When you get a group of Turkey hunters together and the stories start flowing one thing becomes apparent, The sounds of spring dominate the conversation. We judge each other by our ability to imitate a turkey, we wax poetic over birds hammering on the roost, the weird sounds we hear a hen make sticks in our minds, hell we even discuss odd things that make Toms shock gobble. Let’s think about the fact that we have calling championships in which other callers judge the accuracy and artistry of the calling sequence presented on a stage in front of the world. For me though, the sounds are a primer and what really gets my motor turning are the sights of the Turkey woods.

The sounds let me know what’s going on, Tom over there , Hen over there, hunter over there or was that a real bird? That’s the thing, I love the sounds but more and more they seem to be becoming rarer and rarer. Let’s not forget with the progression in call technology and growth in turkey hunting opportunities hunters calling has never been easier or sounded better. This has led to a lot of calls being thrown at seemingly more highly pressured birds. There was an article in a major publication about staying quiet and waiting birds out just a few days ago, this should be the canary in the coal mine of what the sounds of spring are doing to our turkey hunting.

Now picture this, you’re walking a ridge top and calling to get a response from a randy Tom. A few yelps in and he thunders from your north and another one hammers from your west, the best sounds. These birds sound equidistant and are both responsive, guess what matters more than the sound of drumming, spitting, gobbling; which bird can you see first.

I don’t remember every gobble but I sure as hell remember the sights of the steam pouring out of a gobblers face as he gobbles, the iridescent shine coming off the strutting gobbler all puffed up trying to show off, or the patriotic flag themed dome piece poking through the red rippers and he’s picking his way through the thick stuff. How many times have you slammed on the brakes to see what the flock in the field looks like? How many times did that sight prompt your eye to look at your mapping app to figure out if you could get to those birds?

So, as much time as we all like to focus on yelps, clucks, purrs, kee kee runs, spitting, drumming, gobbling and shock calling they are all just sounds in the ether. Clues. What happens if we never get that visual of a bird strutting, or flying down, or a hen sneaking through cover beckoning against you? Let’s look at not only the beauty of these cinematic spring scenes but also what goes into them and how they help us. Look at the more recent tactic of Reaping a turkey, or moving into position behind a strutting Tom silhouette and then shooting the target bird in the face from as close as possible. This tactic works best with a real turkey fan, birds can tell the difference and requires zero sounds, just a natural movement with aggressive posturing from the “Decoy”.

Take a look at hunting decoys and the evolution of Turkey decoys over the years specifically. The foam decoys I had at 12 years old wouldn’t even hit the store shelves these days. We’ve gone from hair dryers to reform them to full body molded decoys. Stuff in your pocket to which frame pack carries my two full body Hens and strutting Jake the best? So, the visuals matter on a nuts and bolts level, and with more calling pressure and smarter birds, they matter more than ever.
When we are using decoys the Gobbler gets to see what we are looking for as well, visual cues. Setting up in shadows, fully camoed, minimal movement, we want our footprint on the visual landscape to be as small as possible. We have to balance this with good decoy placement, set up to compliment the terrain and scene we are trying to paint with sound and sight. It’s a tough mix between a large visual and the subtle nuances of a natural scene. Turkey’s like to strut in the open in the spring, they are prominent on the landscape in this way, but remember this gets them killed and not just by us. When thinking about the aesthetics of the scene, think about the Hen laying in cover, the Jake just out of direct sight, the Tom not fully silhouetted in the strut zone. You can be too in their face but often you can’t be too subtle. Remember nothing is as subtle as a silent “B” and that’s the sort of play you should hedge towards when dealing with the visual acuity of a Turkey.

At the end of the day I don’t believe that the folks who chase spring birds will ever forgo the love and admiration of the music of Turkey’s mating concert. In the end it is probably the most important attachment we have to the birds in many ways. Most of us will never forget the first hammering gobble we heard echo through that early morning misty mountain hop. I’ll never forget the one time I had twelve distinct gobblers answering me and I was too inexperienced to get sight of any of them. But that’s the point at the time I was hunting for the gobble. Now I hunt for the gobbler and I gotta see em to shoot em.
To me the other visuals make for a stark contrast to the spring deer scouting time right before Turkey season too. Early spring in my neck of the woods still has snow and ice, a few leftover beech tree leaves hanging on, some oaks holding a bit of their lobed or spiked plumage and a lot of gray and brown. As turkey season comes in, those colors transfer from gray and brown to being splashed with greens of all hues, reds, blues and violets in the flowers that wake up from the winter nap. The aesthetic is striking. But when you hear that bird call in the distance, as thrilling as that is, remember it matters not until you can see all those colors in his strutting plumage as he does his best spring dance for you, the very best sight of spring.